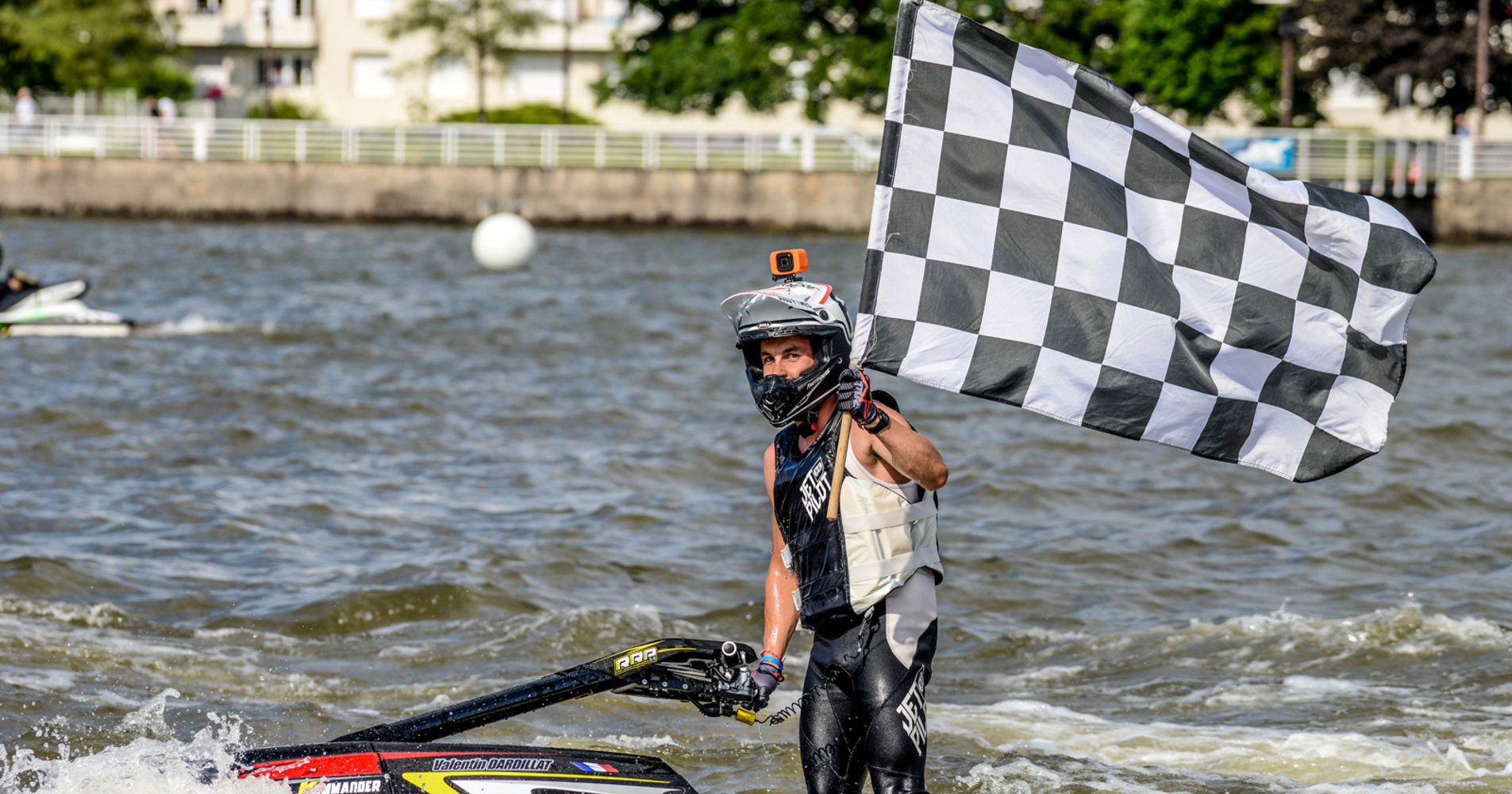 Valentin Dardillat with the checked flag for his overall victory ! 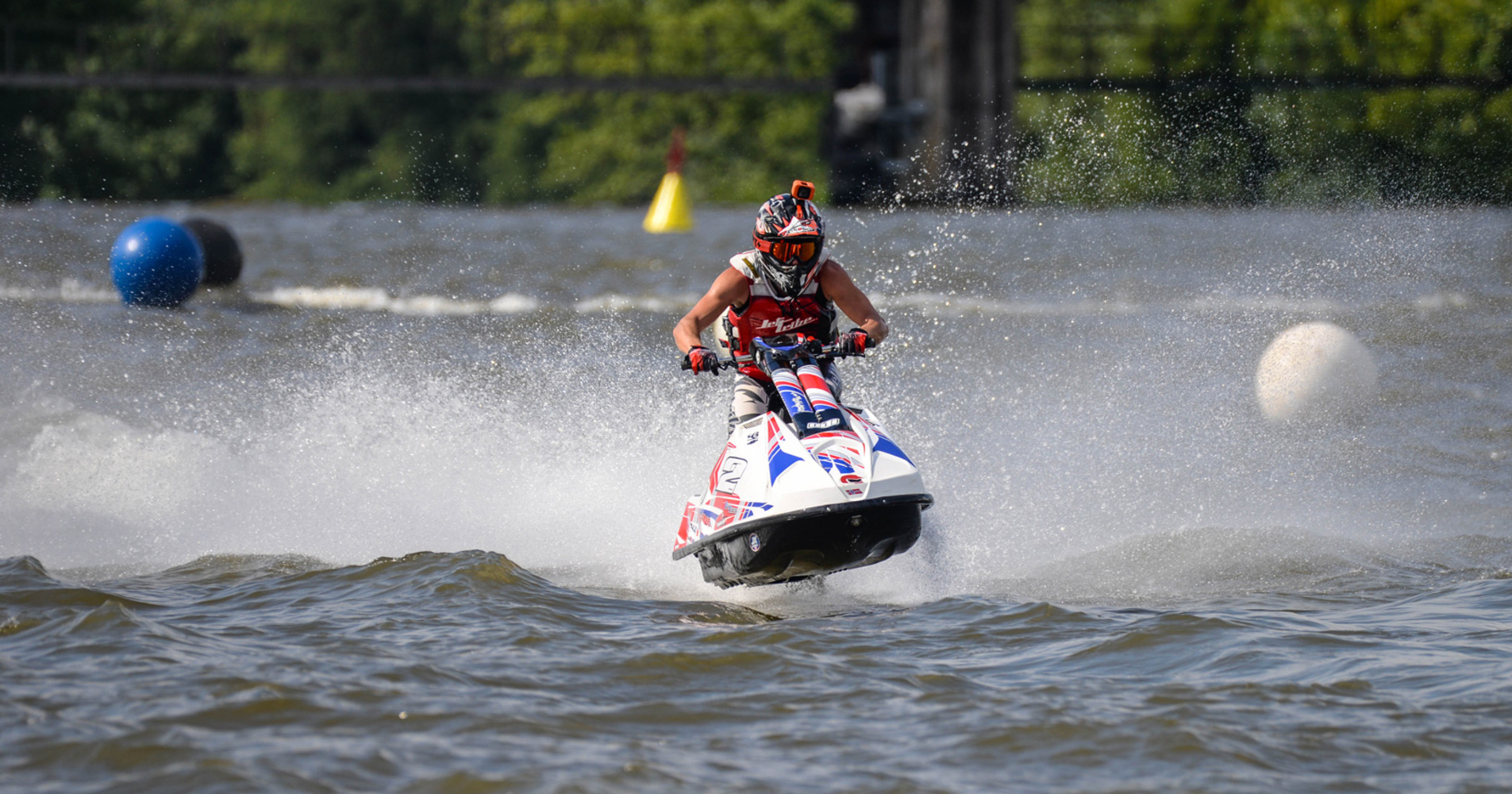 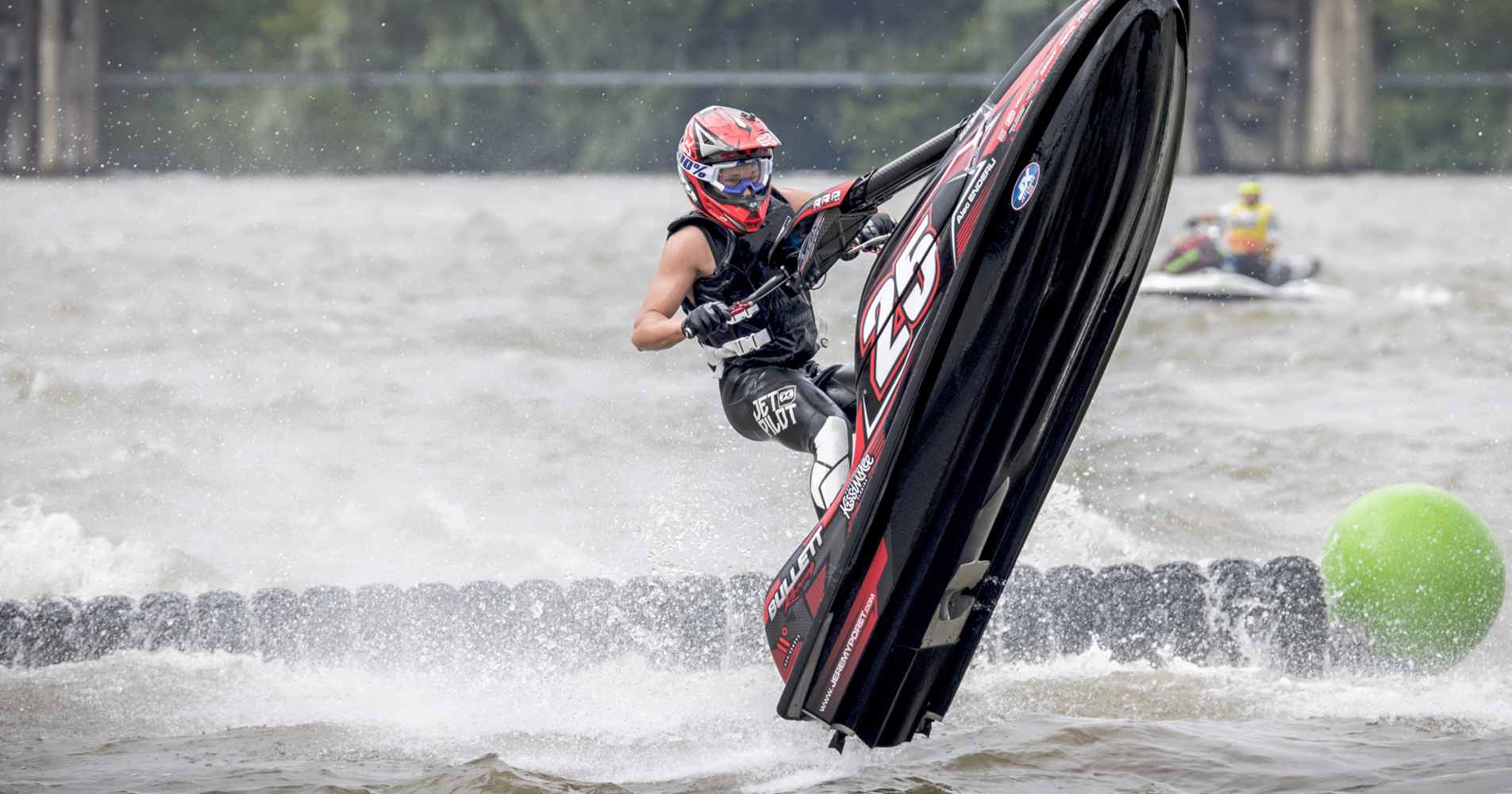 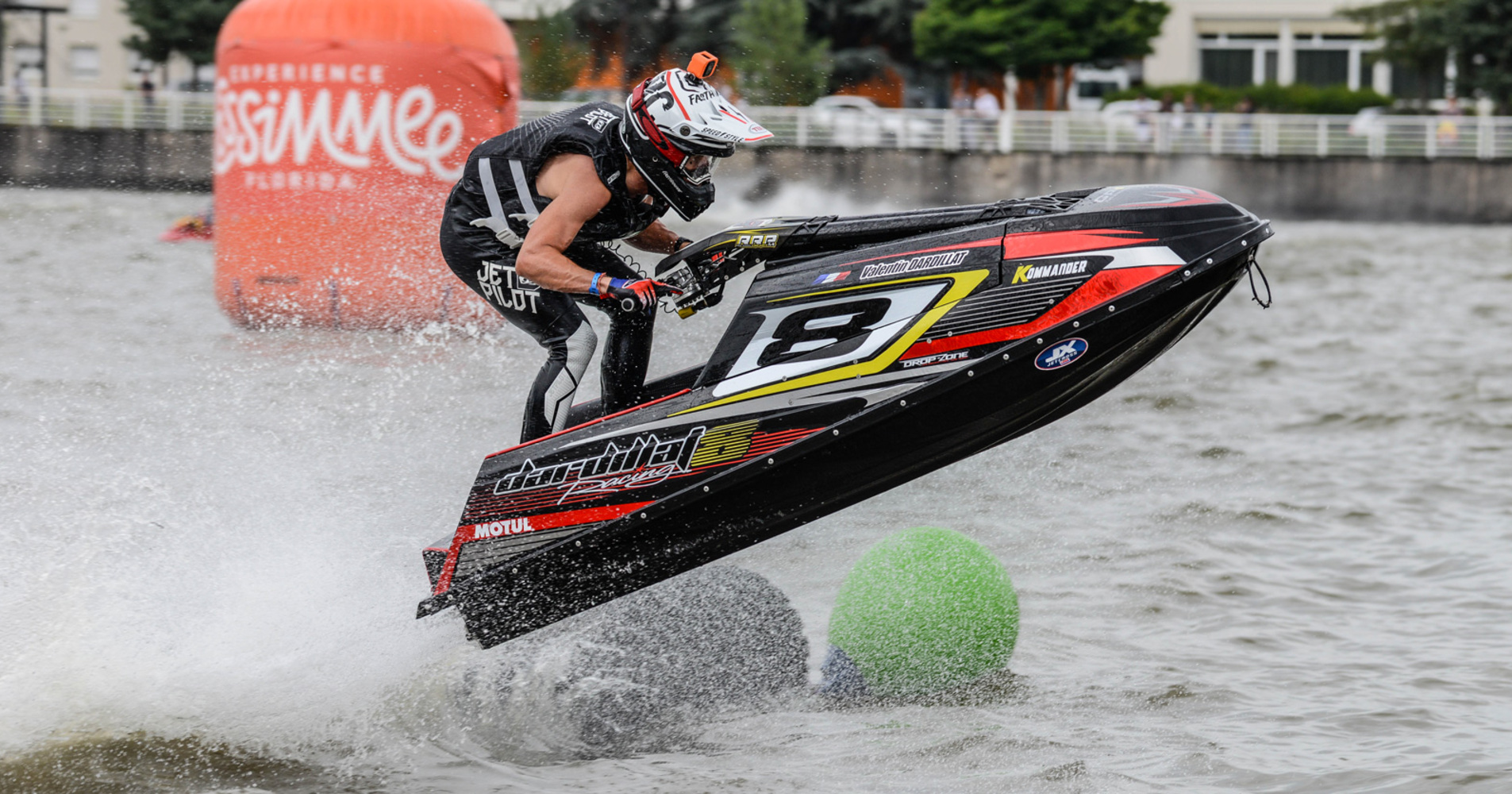 Regularity was the key word for Valentin Dardillat with a 2/2/2 and an overall win, well done!

Last weekend the City of Vichy, nestled on the banks of the River Allier in central France, welcomed over 80 competitors from 6 countries to the third round of the P1 Jetcross Pro Tour.

The race site, located slightly north of the city at the Omnisports Centre, is one of the most attractive stops on this year’s Pro Tour and a favourite with the racers. “As a venue, Vichy has everything a racer wants, a beautiful setting, great facilities and tough racing conditions caused by the back wash from the river walls” said Championship Manager and local native Julien Bastien.

“And just to add more into the mix this year, we’ve introduced two consecutive log jumps on the front straight. We have a saying that if you can win in Vichy you can win anywhere.” Julien Bastien, P1 Jetcross manager

After a torturous second round in Eau d’Heure Lakes, Belgium the championship leader Jeremy Poret, who was suffering with a knee injury, could only muster a 4th overall. But his dominant first-round win provided a cushion which helped him to maintain his overall points lead over reigning champion Valentin Dardillat. 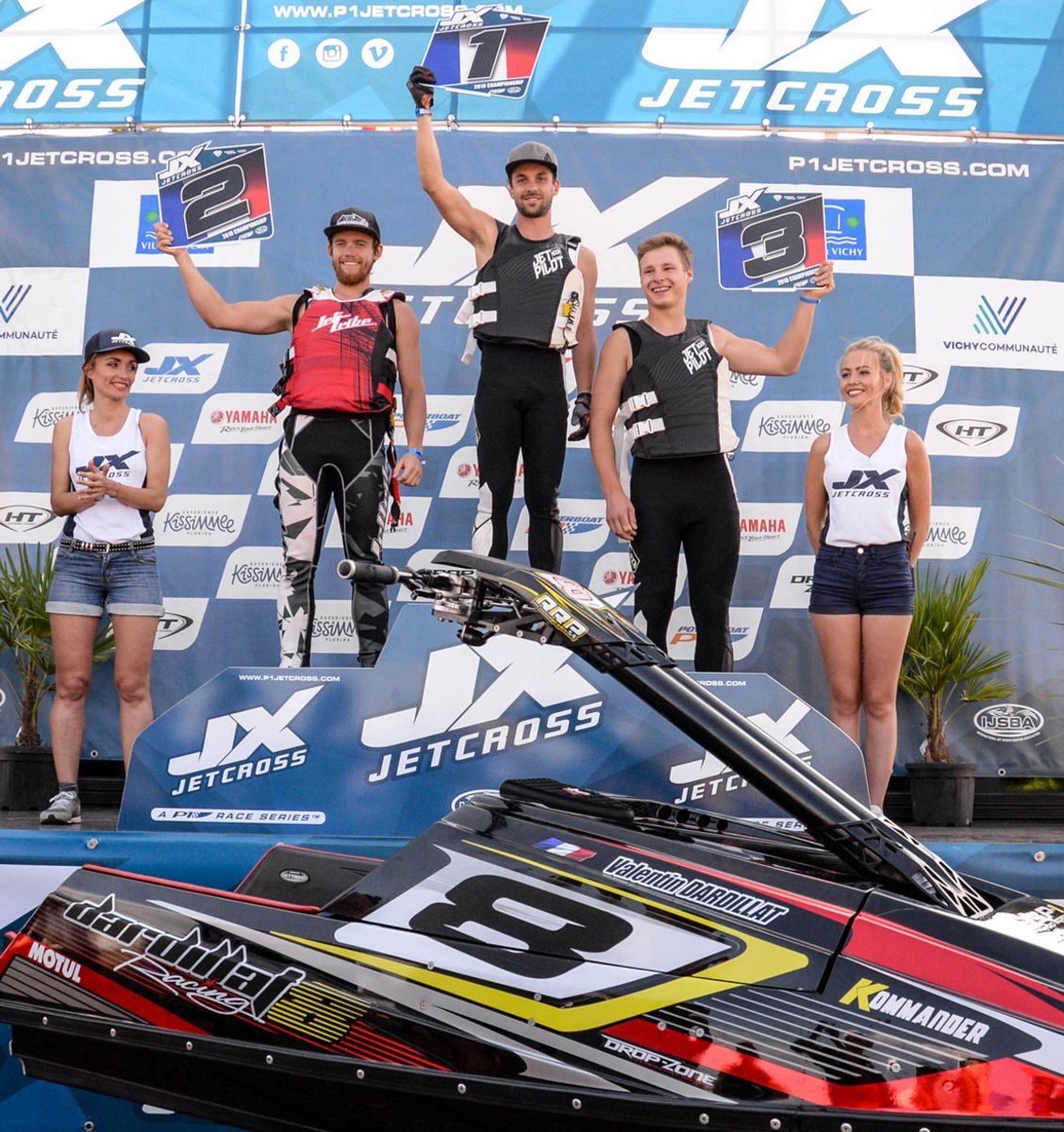 When the field snapped in moto 1 it was Valentin Dardillat who was quickest off the mark and running with the lead on his Kommander GP1 powered by a new Rotax factory engine naturally aspired of 1600cc. The Bullet team riders of Mickaël Poret and Swiss rising star Alec Enderli sponsored by Experience Kissimmee Florida slipped into second and third, but it wasn’t long before they were both feeling the heat from teammate Jeremy Poret, who was making easy work of the double log jumps. Within 2 laps Poret had passed Enderli and was hunting down his brother Mickaël . Within another few laps, Jeremy passed his brother and started to push Dardillat for the lead. The two diced back and forth for several laps before Poret used his speed over the log jump to take the lead on lap 8 and the eventual moto 1 win.

Mid pack round 2 winner Stian Schjetlein from Norway suffered a poor start but gradually made his way through the field and chased down the leading pack. In the closing laps Schjetlein managed to pip Alec Enderli to the third spot but didn’t have sufficient time to unseat Dardillat who finished a comfortable second to Jeremy Poret.

Valentin Dardillat took the his second holeshot of the weekend but this time Jeremy Poret’s Bullet V3 was right behind him. Poret’s brothers Morgan and Mickaël fell into third and fourth places with Alec Enderli in fifth. Much to the delight of the spectators, Poret was using his speed and confidence over the logo jumps to close the gap on Dardillat who was being a little more cautious. Poret overtook Dardillat mid-air several times only for the youngster to use the impressive top speed of his Kommander GP1 watercraft to undo Poret’s hard work and retake the lead. When Poret did manage to go to the front he rode off to a comfortable win. Dardillat remained in second ahead of Morgan Poret who would finish in third.

With two strong wins, Jeremy Poret went into the third and final race of the weekend as the favourite but a lack of concentration off the start - which took him the wrong side of the holeshot mark and crashing into this brother Micheal to end his chances of a final moto win - meant all bets were off as the hero of the weekend went to zero in a space of seconds. 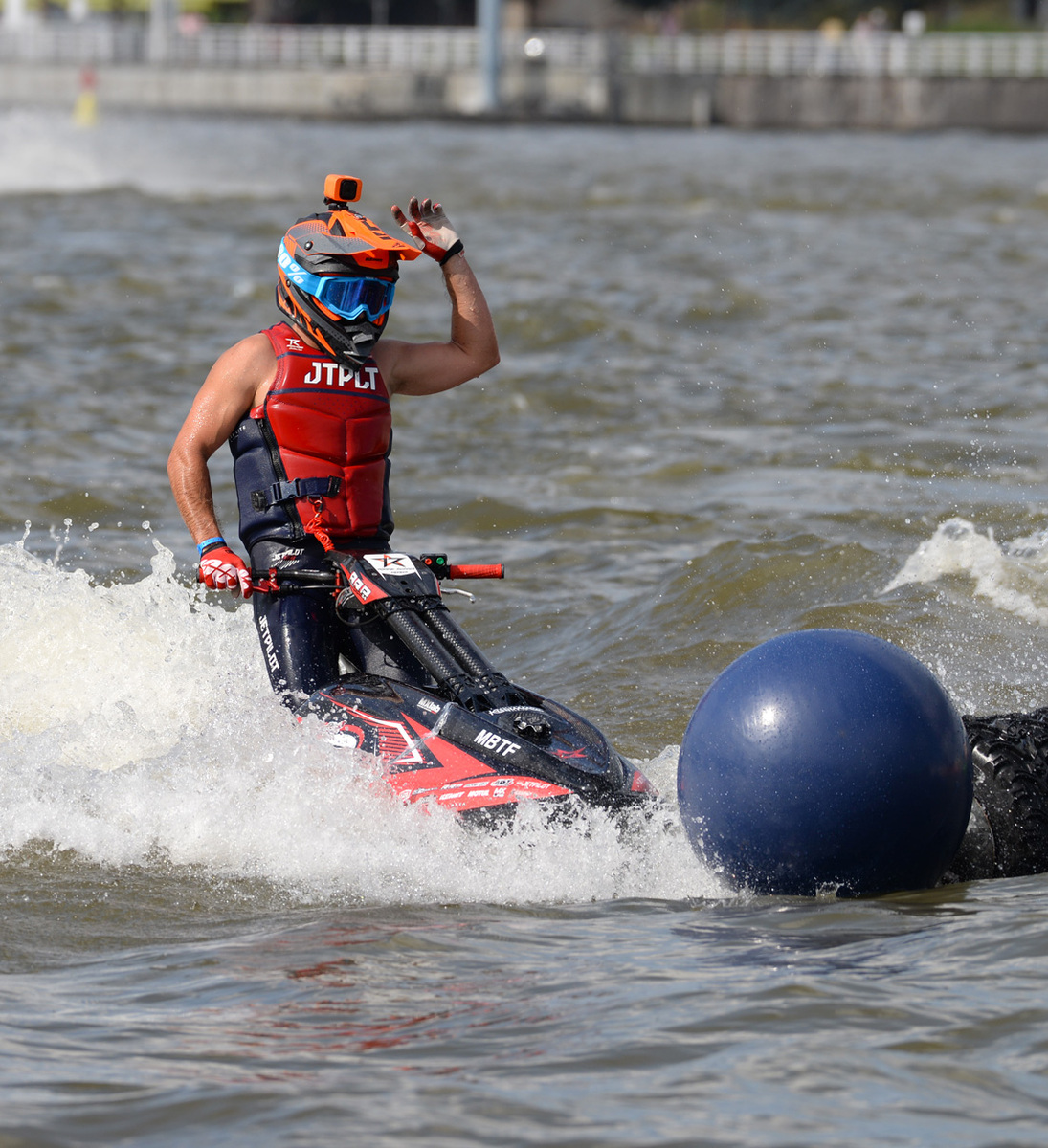 After winning moto 1 & 2 Jeremy Poret did some unusual mistake in the final moto, took the wrong holeshot buoy and a mechanical issue on lap 3, stopped his chance for GP win.


Despite his error, Poret went onto holeshot the race oblivious that his actions resulted in an instant disqualification for reckless riding. The Norwegian Stian Schjetlen put his Pro Force into second, which unbeknown to him was actually first place, with Marvin Martinez in third.

Jeremy Poret continued to lead until lap 4 when mechanical issues cut his race short, lessening the pain of being DQ-ed later on, handing Schjetlen the lead. Further back in the pack Valentin Dardillat and Alec Enderli had both suffered a poor start. The two battled hard for several laps until Enderli managed to pass Steven Loiodice for fourth and in the process gave himself some breathing space between himself and the hard charging Dardillat. It took Dardillat another lap to dispose of Loiodice, but once accomplished he stepped up his pace and managed to pass both Enderli and Martinez in one lap to move into second behind Schjetlen who went on to take the win. Dardillat would finish second but it was Alec Enderli who made the move of the weekend to snatch third place from Martinez on the final lap.

When the points were finally settled after a dramatic two days of racing, filled with plenty of thrills and spills, the weekend belonged to the reigning champion Valentin Dardillat whose consistency played a big part in taking the overall win and in the process moving him within 24 points of the championship leader Jeremy Poret. Stian Schjetlein’s moto 3 victory elevated him to the second step of the podium, whilst Alec Enderli’s last lap ‘overtake’ gave him his second podium finish of the year and fifth overall in the championship.

Next month the racers will head to the waters of Lake Geneva, Switzerland where the resort town of Le Bouveret will host the penultimate round of the season on 18 and 19 August.